This steroid belongs to a class of chemicals known as diuretics. It is specifically known as a loop diuretic because it helps to regulate the amount of water in a person’s body. It is one of the most potent among the diuretics. This makes it carry a proportionate amount of risk. 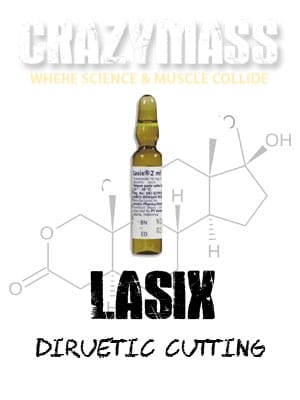 Legal Alternatives to Lasix for Bulking

The risk posed by Lasix is that it caused potassium to be expelled from the body. It also causes the body to expel water. Putting the dehydration part aside, potassium is very important in the body because it is an integral part of the nervous system. Nerves cannot work without proper amounts of potassium and sodium.

People who use Lasix must make sure that they don’t use excessive amounts of the compound. Additionally, to prevent any medical complications, they can take potassium supplements to replace lost potassium. Lasix is used by athletes in order to remove unwanted water from the muscles.

Some steroids cause water to be retained in the body and this causes a person to get tired quickly when exercising. Pain may also be experienced when the muscles have excessive water.

The presence of excess water in muscles also means that additional weight from the use of steroids may not be as a result of increased lean muscle alone. For people who participate in competitive sports, increase in weight may cause them to be graduated to higher competition levels even though all they have added to their bodies is water.

Lasix is a fast acting steroid and it quickly dries up excess water from the body. This makes weight classification much more reflective of lean body mass. The steroid is commonly used by boxers and bodybuilders to make sure that there is no excess water in their bodies. It also reduces fatigue that is synonymous with having too much water in muscles.

Lasix can be injected directly into the body but it can also be taken orally. Orally ingested forms of the steroid take longer to deliver results thus people who want quick results use the injectable form. The steroid has a short half-life and it is quickly expelled from the body in time to enable people to pass drug testing.