Methyltestosterone is an Androgenic Anabolic Steroid (AAS) that is used medicinally to treat men with low testosterone and breast cancer in postmenopausal women. Because it has a high rate of aromatization it produces estrogen at a problematic rate for men, thus decreasing its popularity for bodybuilders. 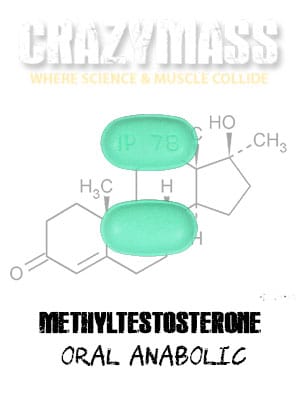 This is a steroid whose chemical formula has been designed to be broken down by the liver after use. It is a 17-alpha-methyl steroid and it is taken orally and is highly effective because of the alterations made to it. In addition to being very effective at its job, the steroid can cause little to no side effects if its intake is regulated properly. Steroids that are broken down by the liver can be very toxic and unfortunately, methyltestosterone is one of them. For this reason, it to be taken in closely monitored doses to avoid damaging the liver.

The steroid is androgenic in nature which means that it interferes with the production of the male hormone, testosterone. The steroid causes a high rate of aromatization and this is a serious issue for men who use it. Aromatization is the production of excessive estrogen as a result of the breakdown of the steroid in the liver and it could cause men to start developing feminine features such as breasts. Women who use the steroid suffer from virilization which is a process that causes an increase in body and facial hair, acne, deepening of the voice and oily skin.

Use of methyltestosterone compromises production of testosterone but the effect is not permanent. The body resumes normal production of testosterone after a person stops using the steroid. This hormone causes an increased amount of aggression which is a much-needed change for people that engage in competitive sports. The aggression increases a person’s urge for physical exercise and this inevitably leads to increased muscle mass.

Although steroids are great for building strength and increasing the amount of lean muscle, their effectiveness is only as good as the user’s dedication to improving his or her body. When you use the steroid for bodybuilding purposes, you should avoid substances that exert pressure on the liver such as alcohol and narcotics. The steroid is not designed to work without a person increasing his or her physical activity. A word of caution goes to people that have been diagnosed with liver problems. This steroid should not be used because it could lead to medical complications.