Similar to Sustanon, Omnadren is both less expensive and less quickly effective. It must be injected regularly and be paired with a balanced diet for maximum results. Like many steroids, water retention and estrogen-related side effects are to be expected. 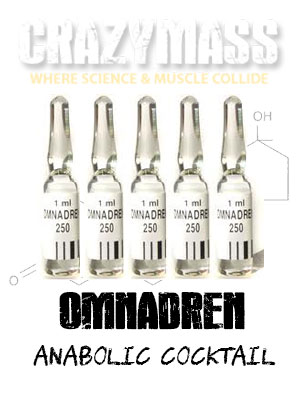 It is a testosterone-based steroid that has four esters which makes it one of the best testosterone steroids in the market. The steroid is remarkably similar to Sustanon which is a steroid that is used to reduce body fat. The main difference between the two steroids is the composition of esters in their structure. Both have four esters but the fourth ester is different – Omnadren has caproate ester whereas Sustanon has decanoate ester. Both the steroids have very similar effects but Sustanon is more potent and expensive than Omnadren.

Omnadren is quickly expelled from the body and it has no adverse effects if it is used frequently. The recommended dosage is one injection daily or on every alternate day. The effects of the caproate ester in Omnadren last longer but they also take a longer time to become visible. For this reason, a person using the steroid should consistently inject it into his or her system to reap the benefits. This causes a build-up of energy in preparation for strenuous physical activity. This steroid is useful for people with long-term plans of gaining muscle and mass.

One of the effects of this testosterone-based steroid is that it will be broken down into estrogen. This means that users will have excess amounts of estrogen in their systems hence the negative effects of estrogen. The steroid causes increased retention of water in the muscles. This has the effect of making a person too tired quickly when exercising. It could also lead to pain in the muscles when a person undertakes strenuous activities. Although the first months of using Omnadren will be characterized by increased energy production and muscle gain, they will be canceled out in the long-term due to water retention.

A properly balanced diet should be maintained when a person is using this steroid for whatever reason. In addition to a good diet, a person should increase physical exercise in order to reap the full benefits of Omnadren. The quality of developed muscle will depend on the quality of food eaten. A person can use anti-estrogen drugs to prevent the side effects of having too much of the hormone in the body.