Potent and expensive, this testosterone steroid is designed for slow release, garnering a long-lasting effect. It allows for fat burning with muscle building. Common Androgenic Anabolic Steroid (AAS) side effects present with use. 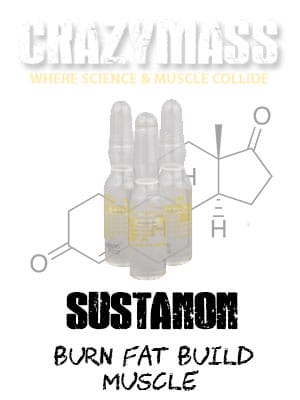 This is a steroid that is very similar to Omnadren – a steroid used to increase muscle mass and reduce body fat. Sustanon has a total of four esters, one of which makes it different from Omnadren. Sustanon is significantly more potent than Omnadren and for this reason, it is also more costly. The esters present in Sustanon are released very gradually into the bloodstream, therefore, ensuring that it has a long-lasting effect.

The effect of a single injection of the steroid can last as long as one month, therefore, people do not have to worry about injecting themselves every day. It is also much more hygienic to inject monthly as opposed to daily for other steroids. One of the setbacks of the steroid is that it has many of the side effects that are caused by other steroids. It is also more costly than other similar steroids available in the market.

One of the benefits of Sustanon use is that it helps people to reduce fat in the body, therefore, improving the ratio of muscle to fat in the body. It also creates room for fat to be replaced by muscles in the body. The steroid promotes protein synthesis in the body which has a major impact on the production of muscular tissue. In order to fully benefit from using this steroid, a person must increase his or her consumption of protein. Sustanon increases aggression in users and this is very important for bodybuilders and people that engage in frequent physical activity.

Sustanon increases the number of red blood cells in the body and therefore increases oxygen supply to the muscles. This increases energy production as well as stamina for prolonged exertion. It also makes it easier for the body to recover after a bout of intense physical activity. Just like other steroids, Sustanon has several side effects. One of the effects is that it causes gynecomastia – a condition that causes men to develop feminine qualities. It also causes women to exhibit muscular features such as deep voices and facial hair. Other effects of long-term use include hair loss, oily skin, and fattening among others.